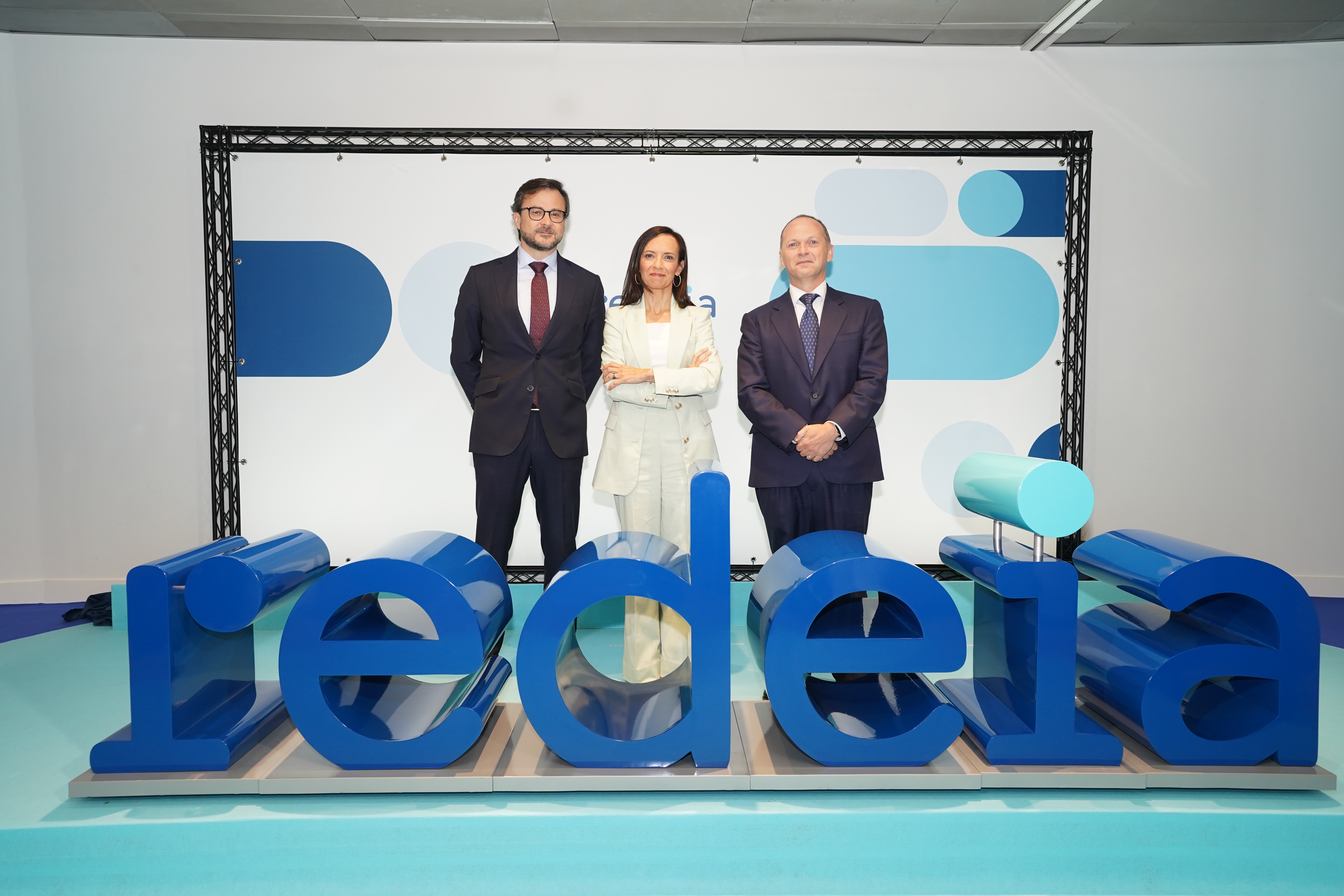 "Red Eléctrica Group is now Redeia", this is how its Chairwoman, Beatriz Corredor, presented the new brand of the Company today during the 2022 General Shareholders' Meeting. "Today we are renewing ourselves to continue moving forward and we are doing so under a new brand that will drive our progress in the coming years", explained Ms. Corredor.

Redeia, as the parent company, is launching a new identity with the aim of clearly and unequivocally defining and conveying the new reality of the corporation: "A solid and diversified group, a benchmark in the energy and telecommunications sectors; a group that, after successfully completing our corporatisation process, is moving forward with the strength of its five companies. An international corporation, present in Spain and Latin America and firmly committed to their progress", emphasised the Chairwoman.

After more than 37 years of history, the Company is taking this step to consolidate the cohesion of the corporation, its positioning and that of the five companies it is comprised of. A change that is limited exclusively to the brand identity of the Group and which will allow the modernisation of its corporate emblem and that of its subsidiaries with a more digital, modern, dynamic and flexible approach. "With Redeia, we are neither changing nor transforming. Neither the corporation nor its companies", explained Beatriz Corredor. Thus, both the corporation and all its companies will maintain all their corporate names.

Roberto García, CEO of the Company, explains that "as of today, we are simplifying our brand architecture and making it more efficient, channelling the strength of Redeia through our five pillars: Red Eléctrica, Reintel, Hispasat, Redinter, the new brand of our international subsidiary, and Elewit". He also added, "in short, our subsidiaries are still the same as always, five benchmark companies and leaders in their respective fields of business".

Along with this new identity, the Company has unveiled a new tagline, ‘valuing the essentials’, to position its brand. According to Roberto García, it reflects the Company’s growth path and its commitment to "delivering electricity to every corner of Spain and also making connectivity possible through fibre optics and, more recently, through Hispasat satellites. We are also sharing our knowledge with Latin America, and all of this with a commitment to innovation as our hallmark".

In addition, Redeia is accompanied by a new innovative visual ecosystem to update the identity of the corporation and all its companies. For its CEO, the new image "connects routes (a set of points) and lines that inspire the grid with which the Company was born and represents our pioneering nature". Furthermore, this new design bolsters the Group's strengths: its commitment to sustainability, innovation and its focus on people.

The presentation of Redeia was completed with the launch of a new website and new profiles on social networks: Twitter | LinkedIn | Youtube. For its part, Red Eléctrica will continue to use and maintain the same channels as before (websites, apps and social networks).

Main highlights of the Meeting

During this Shareholders’ Meeting, the top representatives of the corporation also focused on the main advances with which it is promoting the dual ecological and digital transformation guided by its current Strategic Plan. Among others, the Chairwoman highlighted the recent approval of the 2021-2026 Network Development Plan, which is binding for Red Eléctrica.

Ms. Corredor stated that "this Plan is strategic for the future of Spain" and that Red Eléctrica is already making significant progress in key projects such as the interconnection with France across the Bay of Biscay, the link between the Spanish mainland and Ceuta or the submarine interconnections between Ibiza and Formentera and between Lanzarote and Fuerteventura.

For his part, the CEO said that 2021 was a year in which Redeia consolidated itself as a key player in the telecommunications sector. Operations such as the agreement for the acquisition of 49% of Reintel by KKR, which will allow it to accelerate its growth; and the incorporation into Hispasat of the Media Networks business in Peru or more recently, in March, with the incorporation of AXESS Networks, have contributed to this consolidation. The latter two reinforce Hispasat's leadership in the satellite services and solutions market in order to bridge the digital divide.

Internationally, the Company has continued to focus on organic growth in the countries where it is already present (Peru, Chile and Brazil). Thus, it recently acquired the Brazilian company Rialma Transmissora de Energia III S.A. with which the international subsidiary adds more than 300 km of high voltage lines (500 kV) to the total assets it manages in the region: with this new addition it now manages 5,100 km of line circuit.

The General Shareholders' Meeting, held today with a quorum of 63.376%, approved, by a large majority, all the resolutions proposed by the Board.

The Meeting approved the re-election of three board directors of the Company: Socorro Fernández, Antonio Gómez and Mercedes Real, and ratified the appointment of Esther Rituerto as a director, who joined the Board of Directors at the beginning of May.

It also approved, in line with the Strategic Plan, the distribution of a dividend of 1 euro per share against 2021 results, of which an interim dividend of 0.2727 euros per share was already paid on 7 January. The Company will pay a final dividend of 0.7273 euros gross per share on 1 July.

Similarly, the appointment of Ernst & Young as auditors of the parent company and its consolidated group for a period of three years (2023-2025) was also approved.

PR - The Red Eléctrica Group is changing its brand name to Redeia (PDF - 119.8 Kb)
Suscribe to our newsletter!